Home/Interview with Jenn Scott
Previous Next

Author Jenn Scott on POV, Intention, and Identity in ALL THE TINY BEAUTIES (September 2022)

NM: In All the Tiny Beauties, you juggle the perspectives of five major characters—all damaged in various ways, all coming together in various ways—and follow several of them through decades of their lives. No small feat. How did your vision for these characters and their stories coalesce?

JS: The book originated with the character of Webster Eugene Jackson, who was for me the sun all the other characters orbited. When I first moved to California in 2001, my (now) husband lived with the man who inspired Webb’s character. A recluse, this man (I’ll call him Jeff here) had spent many years living alone in the house—his childhood home—until he started a fire in his kitchen, and his estranged family insisted he take on a boarder to keep an eye on him.

Jeff was very comfortable wearing women’s clothes. He padded around the house in women’s lingerie and always wore foam breasts. I never saw him dressed any other way. His complete ease with himself stuck me, and also the idea that someone could live for so long without people—decades, in fact. That a person who’d retreated from the world might, under certain circumstances, have to rejoin it . . . How would such a thing play out?

The book began as a short story, which is an absurd thought for me now, considering how expansive the novel became. Of course, Webb was the main character in this story. His estranged daughter, Debra, also featured prominently, as did a young woman named Hannah who had recently moved in with Webb. I realized pretty quickly that the form wasn’t right for this subject matter. There was no way to persuade people to care about Webb’s fate the way I wanted them to in twenty pages. There was no way to do justice to the intricacies of his character and his life. It needed to be bigger. I put the story aside and moved on with my life, knowing that if I ever wrote a novel (which I definitely wasn’t going to do), it would be the fleshed out, realized version of this story—and what had been the story was the ending of the book. I was writing to this exact moment. The present was important (the actual unfurling of this man back into life, the people who coax him back into it), but the past, and his formative relationships, all those things a short story couldn’t encompass because there simply wasn’t space, became key. I had three of five point-of-view characters from the story alone: Webb, of course, Debra, and Hannah. Three other key characters emerged. Colleen, Webb’s neighbor, who locates Debra in Los Angeles and connects his past and present lives; Beverly, Webb’s first wife and Debra’s mother; and Hila Firestone—a character I desperately want to ask to dinner. It is Hila who urges Webb to explore who he is and to honor, rather than fear, the truths inside of him. She is, as Webb says, “a doer, and a maker.” It is Hila who bridges Webb’s past with his present, and it is Hila who helps usher Webb—and in a sense, all the characters—into the future. 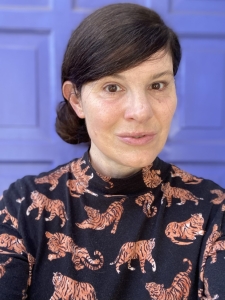 NM: Well, except for Beverly—Webb’s wife, then ex-wife—whose trajectory is arguably the book’s greatest triumph, in part because we understand the disastrous choices she makes, why she makes them and how she is trapped by them. She and Hila are formidable women in diametrically different ways, and their showdown feels earthshaking. Did you see it coming? How did these women, as characters, come to be?

JS: The character of Hila was born of a bag of vintage clothes. The man earlier called Jeff—the man my husband lived with for three years—once gifted me a garbage bag filled with dresses. These had once belonged to a woman he knew, a woman I sensed was important to him. He believed they would fit me, and that I would love them. I remember being dubious, but when I opened the bag, I saw he’d been right. He’d given me beautiful dresses, and everything fit perfectly. When I started writing the novel—considered the characters I wanted to people it—I kept returning to the woman who had chosen these particular items of clothing. I didn’t sketch anything out. I just started writing, and from the first moment Hila appeared on the page, I fell in love with her. At times when it seemed this novel wouldn’t be published, wouldn’t find a home, I would think of Hila and how she needed to be of the world.

Beverly was based very loosely on my grandmother. My grandmother is not merciless the way Beverly is—not conniving or manipulative—but she came into adulthood at the same time as the character. Like Beverly, she too was the class valedictorian and chose to be married at a young age. Beverly is the embodiment of the generational tension existing for women in the 1950s. She is pushed toward a fairy-tale notion of marriage and homemaking, happiness through subservience, despite her desire to do other things. She’s a beauty queen who’d rather play chess. Beverly learns pretty quickly that this happily-ever-after narrative is a mirage. Mired in misery from the beginning of her marriage, she spends much of her life trying to come to terms with the tiny space she’s been given in which to maneuver.

I didn’t initially plan that these two women would step into scene together. In the original drafts, I avoided a lot of conflict, which is obviously not great for storytelling. While writing the book I was, like a great many people, watching Game of Thrones. One of the things I liked about the show was how eventually characters who’d only heard about one another would end up meeting. Sometimes it was epic, sometimes it wasn’t, but it was usually interesting to see what these characters would finally say to one another, given the chance. I imagined a reckoning between Hila and Beverly, and now it’s one of my favorite scenes in the book.

NM: Well, there’s plenty of conflict now, and not just among characters. One of the remarkable things about the novel is how you present generational tension and expectations regarding gender. Beverly would like to attend university, but she’s forbidden by her parents, who say they’ll pay for a wedding but not for schooling. Webb, on the other hand, loves to bake, yet his (brutal) father forces him to play football. And of course Webb loves women’s clothing. Luxuriates in wearing it, first secretly, then (thanks to Hila) openly. Foreword Reviews praises the book for “questioning what it means to conform to gender and social roles” and for its “deep investment in the multiplicity of identities.” Can you speak to your intentions along these lines? 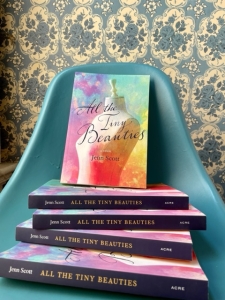 JS: I’m pausing on the word intention. There was no specific intention to question what it means to conform to gender and societal roles; or there was, but it was a logical conclusion of these characters moving through time and space—through generations—honoring themselves (or, in instances, not honoring themselves). Unlike an egg’s white and its yolk, these things were inextricably bound and could not be separated. To talk about these characters necessarily meant questioning gender and societal roles, as they are bound by the parameters of the time in which they live. Webb is the beating heart of this book, and he is a man who has experienced a fluid sense of gender from a very young age. He does luxuriate in women’s clothes, just as he luxuriates in the work performed in the sanctum of the home, just as he luxuriates in the sanctity of the home itself. Webb would love nothing more than to create a beautiful home for his family, to cook meals, to concentrate on the tiny things (beauties?) that women, not men, were entrusted with. Because he marries in 1957, Beverly inherits this role, which she’s not remotely interested in having, and it’s an especially bitter pill for her to swallow because Webb’s mother will not cede the role of homemaker to her. So Beverly is allowed to have neither the life she wanted, nor the life society expects of her. The irony, I think, is that had their roles been more fluid, Webb and Beverly likely could have been happy—or at least, found a modicum of happiness. Their story is the inverse of the fairy-tale. Star football player marries beauty queen, but because the football player cannot be the beauty queen and the beauty queen must be a housewife, they are doomed. So yes, I guess the novel is an argument for the multiplicity of identities.

NM: Though writers are told—at least in my experience—not to write to/for an audience, we certainly anticipate one. To what extent do you think of the reader as you write? Whom do you imagine as your ideal audience? And what do you want said audience to take away from the book?

JS: When I’m actually writing, I don’t think of the reader too terribly much—or as much as I’d like to, having been a girl who went to Catholic grade school and in whom the nuns tried to instill consideration of others. I thought about the reader very much in terms of structure and making this story navigable. The novel spans so many years and there are five point-of-view characters occupying different decades. There was the constant question of How do I distill this, make it as neat a package as I can manage? An embarrassing number of words were cut from this book out of consideration for the reader. Which. Perhaps my ideal audience is a patient audience, an audience that’s willing to let things accumulate and evolve and become. (Grateful Dead fans, think “Dark Star” played live, the slow build until Jerry starts singing.) My ideal audience is also invested in the undercurrents of quiet, everyday struggles. (A professor I really admired in grad school once commented on my investment in the quotidian.) Mostly I would just be thrilled if people read the book. And I’m hoping some feel a moment of resonance, the acknowledgment that yes, daily life is complicated, vaguely impossible, but that—at certain moments—there is inherent beauty in this struggle.