Home/Malia Marquez on What to Read for Hispanic Heritage Month: Part 1
Previous Next 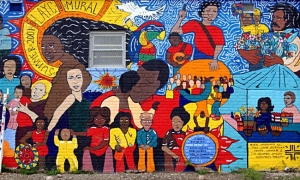 September 15 through October 15 is Hispanic Heritage Month, a time for celebrating the culture, lives, and achievements of Hispanic and Latinx people all across the Americas. The month begins on September 15th in honor of the anniversary of independence for El Salvador, Costa Rica, Guatemala, Honduras, and Nicaragua; Mexico and Chile celebrate their independence shortly after, on September 16th and 18th. Please enjoy part 1 of 3, a roundup of titles in honor of HHM, recommended by Acre Author Malia Marquez, author of This Fierce Blood, out October 15, 2021.

A fairy tale run amok, The Taiga Syndrome follows an unnamed ex-detective as she searches
for a couple who has fled to the far reaches of the earth. A betrayed husband is convinced by a brief telegram that his second ex-wife wants him to track her down—that she wants to be found.

In this sharp, witty debut, James introduces us to Mona Mireles—observant to a fault, unflinching in her opinions, and uncompromisingly confident in her professional abilities. Mona is a millennial perfectionist who fails upwards in the midst of the 2008 economic crisis.

The Lost Book of Adana Moreau by Michael Zapata

In 1929 in New Orleans, a Dominican immigrant named Adana Moreau writes a science fiction novel. The novel earns rave reviews, and Moreau begins a sequel. Then she falls gravely ill. Just before she dies, she destroys the only copy of the manuscript. Decades later in Chicago, Saul Drower is cleaning out his dead grandfather’s home when he discovers a mysterious manuscript written by none other than Adana Moreau. With the help of his friend Javier, Saul tracks down an address for Adana’s son in New Orleans, and as Hurricane Katrina strikes, they head to the storm-ravaged city for answers.

Bless me, Ultima by Rudolfo Anaya

Antonio Marez is six years old when Ultima comes to stay with his family in New Mexico. She is a curandera, one who cures with herbs and magic. Under her wise wing, Tony will probe the family ties that bind and rend him, and he will discover himself in the magical secrets of the pagan past—a mythic legacy as palpable as the Catholicism of Latin America. And at each life turn there is Ultima, who delivered Tony into the world . . . and will nurture the birth of his soul.

Curious about Our Covers?

Malia Marquez on What to Read for Hispanic Heritage Month: Part 3 of 3

A New Review of The Beforeland… in THE NEW YORK TIMES BOOK REVIEW!