An Interview with Thomas Legendre, Part 3

An Interview with Thomas Legendre, Part 3 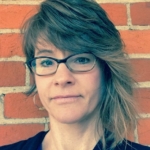 NM: Because the book involves time travel, there are two Aarons and two Violets (what one reviewer calls a ménage à quatre). As readers, we are privy to the thoughts of both Violets—the impassioned musician in 1988 and the frazzled mother of two in 2006. Both her perspectives are written in present tense. We are only allowed into the older Aaron’s consciousness, and his narration is in past tense. Why did you make these decisions?

TL: One of the many paradoxes at the heart of Keeping Time is Aaron’s inability to understand his own past, whereas Violet naturally operates in four dimensions. Aaron travels eighteen years into an apparently fixed past, but he’s still uncertain, even with knowledge of the future he has already lived . . . since that future is now jeopardized by his arrival at an earlier date. Rather than bypassing cause and effect, he finds himself more enmeshed in it, from the first chapter when he catches a lamp that his yet-unborn daughter will break years later, to his 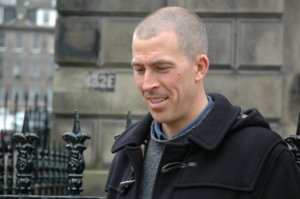 bewilderment over a coal cellar key duplicated by time travel, to his attempts to stash a roll of film in 1988 in order to pick it up in 2006—all in trying to determine if he is traveling to an alternate universe or, instead, altering his own timeline. One thing inexorably leads to another for Aaron as his experience in 1988 alters his behavior in 2006, which in turn affects his actions in 1988, and so forth. Causality isn’t thwarted, but instead is compounded, making his “present” in both time frames even more uncertain and uncanny. His past-tense narration corroborates this state of affairs in that it is grammatical rather than ontological, lacking any retrospective wisdom that might come after the events of the novel have concluded. Though he knows in a factual sense where certain people will be on certain occasions and how global events will unfold in 1988, he is none the wiser about more significant issues. You could say his past-tense narration calls attention to the paradox of his condition as a time traveler still caught in his own uncertain present.

By contrast, Violet’s present-tense narration has the immediacy of music, something happening “now” (she says, “I’m here. I’m now,” repeatedly, like a refrain), yet it belies her musical understanding of both the melody, or linear sequence of events in her life, and their harmony, or simultaneous blend. Her younger self establishes leitmotifs across the two time frames, planting ideas and behaviors that her older self develops later, and vice versa, knowing how they “sound” together. Unlike Aaron, troubled by recursive causality, she plays 2006 and 1988 as a fugue. If I say anything more about this, spoilers will rise up like hellfire and we’ll all suffer. Next question, please.

NM: Aaron is an expat, married and living in Edinburgh. So are you. We know what brought Aaron to Scotland, and why he stayed. What’s your story?

TL: Aaron’s story is much more interesting than mine. I was living in Arizona with my wife, Allyson, who for obscure reasons wanted to get her PhD at the University of Edinburgh. I was her plus one. I thought we’d give it a few years before moving on or perhaps going back to Arizona, which I still miss occasionally. That was nineteen years ago. Now I’m a misfit on either side of the Atlantic in too many ways to describe. Suffice it to say I get impatient with nationalism not only in politics but also in contemporary writing and literature. On a more positive note, the situation has stimulated my neurological sense of language and places and people. My life and work would be diminished without it.