An Interview with Thomas Legendre, Part 2

An Interview with Thomas Legendre, Part 2 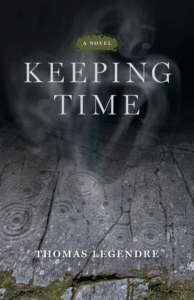 NM: In your essay “A Phenomenology of Fiction,” you describe how modern philosophy and quantum physics undergird not just your characters’ perceptions but your writing methodology as well. I was particularly struck by Christopher Tilley’s treatment of landscape as a lived experience, woven into individual and social memory. Can you describe how his and others’ ideas helped you develop your narrative technique?

TL: There are quite a few sources I could cite here, but I’ll stick to Christopher Tilley’s A Phenomenology of Landscape because I encountered it at just the right moment. Tilley emphasizes the embodied perceptual experience of archaeological sites rather than an abstract bird’s-eye view of inert schematics and assemblages of artifacts. By walking the Dorset Cursus, for example, he reveals how its built and how topographical features guide one’s movement in a specific direction, providing what he calls “a series of contrasts and surprises” that very likely had a ceremonial function.

As I was writing the novel, I began incorporating this approach into the narrative technique, developing what you might call a phenomenology of fiction. In other words, the perceptual experience of characters serves as the organizing principle of narration—not simply interlocking the internal and external details, but integrating them. For example, when Aaron revisits a site he excavated eighteen years earlier, his suppressed memories of an extramarital affair surface through his description of place, as he inhales the scents and touches the stones he once unearthed. Violet has a similar experience on the earlier end of their relationship as she comprehends her seemingly rash decision to marry Aaron. Running with her friend Isobel in Holyrood Park in Edinburgh, she follows a circuit with substantial topography as it rounds the base of Arthur’s Seat. The rhythm of dialogue, along with the attitude shifts between Violet and Isobel, not to mention Violet’s very thoughts, are shaped by the varying levels of exertion as they climb and descend, with the features of the landscape described not simply in order of appearance on the road but also according to the selective heat of her elevated metabolism and endorphins. In fact, the only way I could write this second scene was to cycle around Holyrood myself, following their exact route in order to find a biophysical basis for Violet’s narration. I told you I can be geeky sometimes. It’s not simply an intellectual exercise.