In Part 5 of Acre’s Holiday Sampler, we check in with Jenn Scott, whose story collection, Her Adult Life, just made the longlist for the PEN America Robert W. Bingham Prize for Debut Fiction. In the passage Jenn selected, two restaurant staffers and antagonists—the seasoned Anna and the newbie Hannah (who has developed a habit of talking to the vegetables in the walk-in, and they talk back)—are reeling from the discovery that one of the cooks, attractive and mysterious, has been arrested for killing his girlfriend with a machete.

[Hannah] discovered Anna already inside the cooler. She’d turned off the interior light and was sitting on a crate of radicchio, smoking in the darkness, silencing the vegetables around her. The ember at the end of her cigarette swelled, died, bloomed again. She drank from a chilled bottle of rum, which she offered to Hannah, who refused it.

“It is a paradise here,” Anna said as the fan whirred, “inside this refrigerator. Very cool and silent. A person can think here. A person can breathe. Do you know, where we come from is called the Campi Flegrei, but I have also heard it called the mouth of hell. It is the mythological home of the Roman god of fire, Vulcan. Do you know him?” She did not wait for Hannah’s response. “Antonio and I drove to a place named California not far from here, a place named California, Pennsylvania, where there is a university with a statue of Vulcan, and we stood underneath his hammer and touched it, and I understood that this, actually, is the mouth of hell, though Antonio is too dumb to know it. Do you know,” she said, inhaling deeply on her cigarette, “that the word in this case is the same in both English and Italian. It is called machete in both cases.”

They sat together, growing cold. Hannah heard the basil shiver and sigh.

“You are too young to understand,” Anna said, exhaling. “But for sure, the mouth of hell is in Pennsylvania. Who knew? Who would ever guess such a thing?”

And then, because she was not actually surprised, Hannah shrugged. 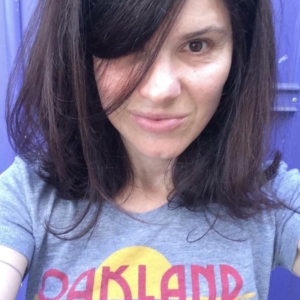 Jenn Scott: This passage is from “Paradiso nel Frigorifero,” one of my favorite stories in the book because I enjoy the cacophony of the talking vegetables throughout. The vegetables in the walk-in are opinionated, catty. In the course of the story, they make the safe haven of the walk-in less safe, tenuous. They echo the clamor inside Hannah’s head; they challenge her. They behave like sarcastic teenagers—but here they’re rendered silent by Anna’s acute misery. Or, really, they’re rendered silent by their resignation regarding these useless people who seek solace in the quiet of the refrigerator. They understand: here is a woman who believes her life resides at the mouth of hell. Here is a woman who senses the insidiousness of her innocuous life, and she will smoke and drink and simply acquiesce. This is possibly true of many of the characters in the book. They understand their place in the world—they have the knowledge—but are rendered motionless before this knowledge.