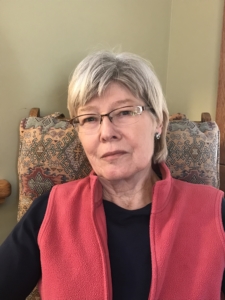 We continue to look back at our premiere year’s titles. This time out we’re featuring Sara Kersting, another debut Acre author, whose taut mystery/psychological thriller DUTY TO WARN, released this October, garnered a starred review from FOREWORD, which called it “captivating.”

The book toggles among three narrators, two psychiatrists and a patient—Robert Percy, a victim of childhood abuse—whom both counselors are attempting to help. The passage Sara selected is from the point of view of the female protagonist, Sonya Nielsen, who harbors her own dark past:

“I may have lied to Percy, implying how much of a conscious choice he had about staying alive. As if his muscles and his bones had no say in it, as if his feet hadn’t made decisions of their own to stay flat on the gritty rooftop. As if his blood hadn’t chosen to keep flowing, his heart beating. As if, however grim the half-life after a brother’s death, it is sometimes the body that chooses to continue, despite the mind.”

Of what the passage means to her, Sara, a retired mental-health professional, says, “Despite the promise of therapy—that with enough reflection, catharsis, self-understanding, and self-awareness, we can control who we are and what we do—there will always other factors in the mix, buried deeply in our beings, that we have yet to understand. Some that may save a life, some that may diminish it, and others that seem compelled to destroy it.”

A New Review of The Beforeland… in THE NEW YORK TIMES BOOK REVIEW!

Watch the Trailer for Ian Stansel’s Newly Released Glossary for the End of Days!