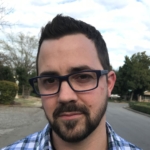 We continue our year-in-review offering with a look at another of Acre’s four debut titles from 2018—Ethan Chatagnier’s Warnings from the Future, a story collection that Kirkus called out as having “real emotional intelligence.”

For the sampler, Chatagnier chose a passage from “Smaller Tragedies,” a piece about a documentary photographer whose profession involves “driving toward disaster,” though now that she has a wife and son, she has agreed to focus on the less dangerous catastrophes. The disaster in this story is an earthquake in California, “the Big One,” and the photo Carmen snaps will haunt her the rest of her life:

“And so the picture began to mean many things that were not presented by its image. Take it as an artifact unhitched from time, and see the many Carmens at many ages, in many circumstances, many moods, gazing into it. It teaches her this now: moments of your life can be tethered to one another. In looking at the photograph, she saw Dean when he was five, like when she took the photo, and as he was when he was nine and looked so much like the boy in the picture that her fears of him maimed or terrified were brought to life, and she saw herself walking out of the office to find him a teenager eating a bowl of cereal in the breakfast nook, walking out of the office to see him as an undergraduate—poorly shaven, electrically sullen, captivating—and she saw that strange boy as he was in a moment of suffering that had long passed, and she saw all the suffering of the world, and she saw herself able to detach from it.”

Chatagnier on why this passage has special meaning for him: “Fiction that upends traditional structure always runs the risk of being sterile—a mechanical experiment, rather than something heartfelt. In Warnings from the Future, I worked to make such structural moves deepen the emotional authenticity rather than distract from it. In this case, that meant disconnecting from linear time in the way we so often do as parents, looking back at our children’s pasts and ahead at their futures.”