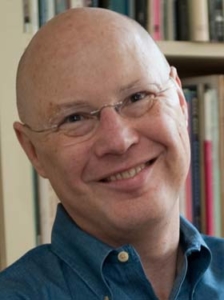 When I was asked to write about an angry baby, I thought of an act of toddler ferocity I’d witnessed when a colleague brought her son to work at the University of Cincinnati. The kid was screaming his guts out in the English Department mail room, and when she leaned over to shush him, he did exactly what Katie Dammit does in the poem: he grabbed fistfuls of her long blonde hair, and he jumped. His mother went down on her face, sprawling on the brown linoleum. She was back on her feet before I could respond, and she looked so embarrassed that I pretended to be utterly intent on unjamming the copy machine. I was like Sergeant Schultz in Hogan’s Heroes: “I see nothing. I was not hier. I did not even get up this morning.”
As I thought about the scene again, I realized there were two men who’d be even more troubled by it than I was. For some years, I have in my poems been listening in on two house painters. The older man’s daughter Katie is in prison for vehicular manslaughter while drunk and high. The younger has a pregnant girlfriend, and his co-worker’s stories have perturbed him. He is frightened his child might be as difficult as Katie. While the two men scrape flaking walls, scrub siding with TSP, and then paint the house, they chew over their worlds with each other, as they do in “Katie Dammit.”
By acrebooks|2019-05-21T14:28:16+00:00June 19th, 2017|A Very Angry Baby: The Anthology|Comments Off on Andrew Hudgins on “Katie Dammit”