At the NonfictioNOW Conference in Iceland

Home/At the NonfictioNOW Conference in Iceland
Previous Next

At the NonfictioNOW Conference in Iceland

Danielle Cadena Deulen: On the hour ride into Reykjavík from the airport, I was struck immediately by the strangeness of the landscape: lava fields full of rolling black stone covered in a light green moss and a wide open sky with very little to transition between the two planes: no trees, few houses (made of metal siding, often rusting), not even a church to skew the view. After a while, a factory along the water appeared with huge plumes rising from its smokestacks, offering at least some sense that humans did, indeed, inhabit the land, even if unbeautifully. Or perhaps it was just my mood. An eight-hour plane ride that switched my internal sense day and night, and landing in a different country on a dreary morning made me off-kilter and lonesome. Once the Flybus reached the outskirts of Reykjavík, however, my mood began to change: not just because of the warmth of the village houses, but also because as I neared the University of Iceland in the heart of Reykjavík I was reminded of my purpose: attending the NonfictioNOW conference, this year as a panelist.

I attended the NonfictioNOW conference as a newcomer two years ago when it was hosted by Northern Arizona University in Flagstaff, AZ. The biannual conference is itself newish, the first runs hosted by the University of Iowa in 2005, 2007, and 2009 before it expanded in 2011. That year it was hosted by RMIT University in Melbourne, Australia. Having attended two conferences in a row now, I have to say that I’ve been impressed with the quality of the conference overall. The AWP conference has its advantages (too numerous to name here), but the longer I’m at this writing life, the more I really prefer smaller conferences for the opportunity to meet new writers, have actual conversations at a leisurely pace, and attend thoughtfully composed panels. NonfictioNow has become the standard for me. Overall, the Icelanders were welcoming and made travel there quite easy, and the University of Iceland, where the conference was held, was small, well-organized, and lovely.

The panels I attended on translation, craft, pedagogy, and identity in CNF procured some of the best conversations in the field that I’ve had the opportunity to witness (and, at times, partake in). Perhaps because the conference is smaller, more intimate, people have a sense that everyone is paying careful attention. The quality of this attention tends to create thoughtful performances on the panels and builds camaraderie among the participants. So, before and after panels, I found myself having in-depth conversations with other conference-goers, usually over an extremely expensive (though delicious) beer in the Stúdentakjallarinn (Student Cellar). The conference does what I wish all writing conferences did: creates an experience in which thoughtful intellectual exchange and new friendships might be made.  And after the conference closed, I toured the country in a brighter mood to see waterfalls, geysers, volcanic craters, black sand beaches, and a stone parliament with centuries of history. Here are a few photos as proof. 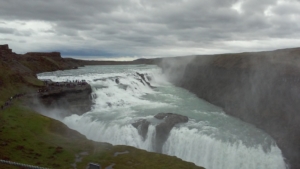 The Gullfoss Waterfall in the “Golden Circle.” 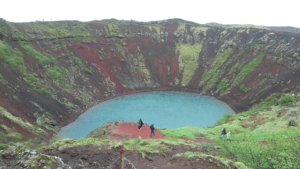 Kerið, a volcanic crater lake located in the Grímsnes area in south Iceland. 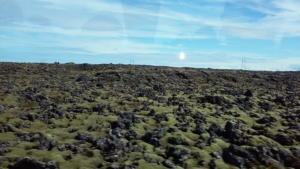 Lava fields on the way to/from the airport outside of Reykjavík. 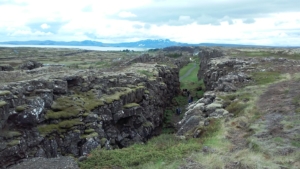 Þingvellir is associated with the Althing, the national parliament of Iceland, which was established at the site in 930 AD. 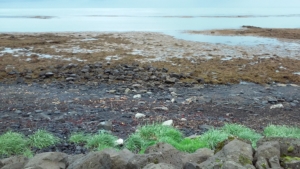 A black sand beach near a coastal village in Iceland. 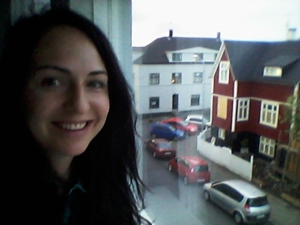 A view from my window in Reykjavík at 11:00 at “night.” The sun never really sets there in June, just skims the horizon.