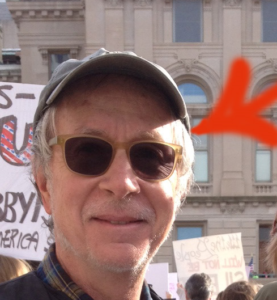 “Play Acting” aims to balance several obsessions. Firstly, I am a writer who enjoys experimenting with language as meaning (i.e., narrative, character development, etcetera), language as code (let’s get a beer and talk about semiotics!), and language as art (a.k.a., emotion and form). Secondly, I am a visual artist who loves pairing the visual with the verbal. I’ve tried many strategies to accomplish this. To my eyes, at least, “Play Acting” is fully half literature and half visual art. Its alphabet is based on the ancient acrophonic principle. The first letter of the name selected to identify an image = the symbolized letter. (This is the principle of the first true alphabets in human history.) But, fluency isn’t necessary to gain access; hopefully, “Play Acting” vibrates on many levels. Reading and seeing. Seeing and reading. The letters include a range of references—e.g., there’s a nod to surrealism (the sewing machine and the ancient dissecting table). I intend for the alphabet to function as a locale in which the story takes place. The letters hint at a “back story,” provide more irony and metaphor, and even double down as a color scheme. The trope of the characters being played by actors, and the baby played by a marionette (which the parents may, or may not, control) can be traced back, to some degree, to my own experience as a member of a puppet troupe years ago. I always wondered why puppets were created to function as specific characters? Why not create a puppet-actor (e.g., a Marlon Brando puppet), and then cast that puppet into various roles (Macbeth, Stanley in Streetcar), so the puppet would both play a part and be a somebody (else) beneath the wooden features and the hand-painted makeup. Of course, this play-within-a-play structure gets intensified by the writing in “Play Acting,” down to the molecular level of the alphabet, in which letters are “played” by images, some of which are figurative.