Tania Hershman on War Games (or The Failure to Plot)

Tania Hershman on War Games (or The Failure to Plot) 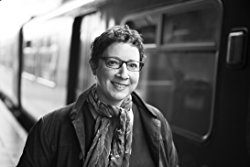 My very angry baby story, “War Games,” emerged during a writing workshop being given by my co-tutor on one of the Arvon foundation’s five-day residential writing courses. Adam Marek, writer of fantastic and fantastical short stories, was talking about plotting. He plots. I do not plot. I have absolutely no idea when I start a story where it might go. That’s the thrill of it for me. But I thought I’d listen to him, have a go. After all, who’s to say I might not take to this strange concept! He led us through various steps to write a paragraph of plot—and this very odd story began to emerge: an angry child who is smoking while she makes soldiers play Monopoly in the middle of a war. Told in the voice of a quite snarky narrator. I was intrigued.

But the thing was, I couldn’t then write the story with this plot. I was instantly bored at the thought that I might already know what happens. So what I did instead was simply use my “plot summary” as the first paragraph of my story. I’d never done this before, give a sort of sweeping layout of what the story would—or might—be. And somehow, by my doing so, the piece also became about how we tell stories, the choices we make as writers. As well as about war, anger, children, parents, humanity, Monopoly, London train stations. I am so grateful to Adam for sparking the genesis of “War Games,” which is one of my favorites—though, as the story “parent,” I feel guilty for saying that, of course. Stories, I love you all.